E-commerce is the next big frontier for social media companies, and Facebook crossed it — again.

The company revealed Thursday that it’s testing out a “Buy” button for Page posts and ads, making it easy for users to shop directly from their News Feeds without ever leaving Facebook. The new feature is part of a test involving only a handful of small and medium-sized advertisers for now.

The move comes as rival Twitter has been making its own forays into commerce under Nathan Hubbard, who was hired away from Ticketmaster last year to head up the push. Sharp-eyed observers recently noticed what appears to be a stealthy test of a “Buy now” button in tweets, and the company also partnered with Amazon to allow the latter’s customers to add items to their virtual shopping carts just by replying to tweets with a hashtag.

Here’s what Facebook’s button looks like, by the way: 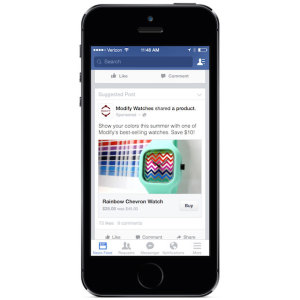 It’s not Facebook’s first attempt to crack the code on e-commerce. Two years ago, the company launched a feature called Gifts to allow users to send each other Starbucks cards, boxes of chocolates and the like, but the experiment was a failure. You can still give gift cards via Facebook, but the physical gifts service, based on Facebook’s acquisition of a company called Karma, was shut down after less than a year.